Donald Gee brings together some fascinating personal accounts of twenty seven pioneers and leaders of the Pentecostal Movement. Both an appreciation and an appraisal of each person are included thereby providing an insight into their strengths and weaknesses. Gee restricted his selection to those whose ‘earthly course’ was finished at the time of writing. A chapter is included on Smith Wigglesworth as well as many of his contemporaries including Alexander Boddy, George and Stephen Jeffreys and Aimee Semple Macpherson.

‘TOUCHED BY THE FIRE - PATRIARCHS OF PENTECOST - THEIR LIVES, THEIR VISIONS, THEIR MINISTRIES.’

See ‘Revival!-Touched by Pentecostal Fire’ (above) for further information.

‘WIGGLESWORTH - A MAN WHO WALKED WITH GOD.’

George Stormont first met Smith Wigglesworth in 1941 and became a good friend. Based upon a wide variety of personal reminiscences, the author provides an insight into the spiritual significance of Wigglesworth’s life and ministry. Also included in the publication is a reprint of ‘Tribute to Smith Wigglesworth’ written immediately after his home call by his son-in-law, James Salter, and first published in ‘Redemption Tidings’ on 28th March 1947. Of related interest is a set of four talks given by George Stormont on Smith Wigglesworth - see Audio Tapes & CDs. 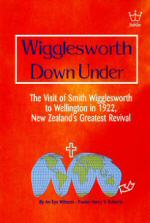 See ‘New Zealand’s Greatest Revival’ (above) for further details.
Wigglesworth Down Under by Harry V. Roberts

Donald Gee’s magnum opus on the history of Pentecostalism. Gee knew Smith Wigglesworth well and this book contains several extensive references to him written from a first-hand perspective. Gee’s observations and comments are of particular help in our understanding of Smith Wigglesworth’s role and ministry within the development of the Pentecostal Movement. The first edition features a selection of historical photographs, including one of Wigglesworth at Sunderland in May 1912. Gee was elected to senior positions in the British Assemblies of God (AOG); he was Vice-Chairman from 1934-1944 and served as Chairman from 1945-1948. 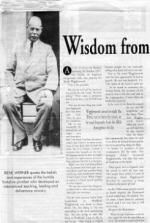 An exploration of Smith Wigglesworth’s beliefs and experiences drawn mainly from the 18 sermons included in his book ‘Ever Increasing Faith’ published in 1924.

‘WITH SIGNS FOLLOWING - THE STORY OF THE LATTER DAY PENTECOSTAL REVIVAL.’

Stanley Frodsham’s classic account of the twentieth century worldwide outpouring of the Holy Spirit. Eye-witness testimonies of Smith Wigglesworth’s visits to Scandinavia and Switzerland in 1921, Australia and New Zealand in 1922 and Rome in 1926 are included.